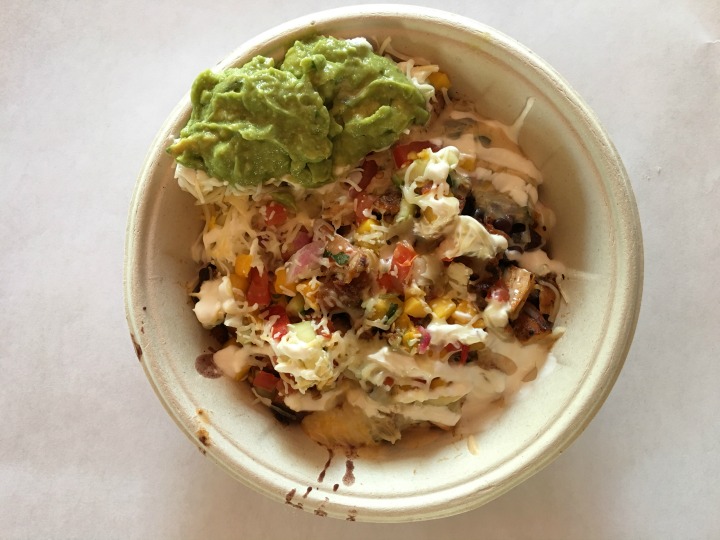 Walking into Qdoba, I wasn’t expecting a difficult time finding something gluten-free to eat. I find Mexican food to be pretty gluten-free friendly if you stay away from the flour tortilla shells. What I did not expect was how amazing the employees at Qdoba would be.

I started off by asking if there was a Qdoba gluten free menu I could look at. The employee behind the counter said they did not have a printed one but that there were many gluten-free options and he could help walk me through finding something safe to eat. He explained that they have soft corn shells, hard taco shells, and burrito bowls that are basically the ingredients of a burrito but served in a bowl, not wrapped in a shell.

I told him I would try the burrito bowl and was pleasantly surprised when he said, “Here, let me take off these gloves and put new ones on so I can be sure there’s not any cross contamination that way.” If you’ve not been to a Qdoba before, it’s set up like a Subway in that you walk down the counter telling them which ingredients you want as part of your meal. One person usually starts the order off and then hands off to the next who then finishes it off and passes it to the cashier. The man serving me told the second worker, “I have a special allergen order here so I’m going to take it all the way down the line.” I was amazed at their attention to detail.

After filling my bowl with rice, beans, and grilled chicken, we got to the sauces. He told me that two of the sauces were gluten-free and two were not. I said I would take the cheese sauce and he told me he was going to double check just to be certain it was gluten-free. Another employee walking behind him at the time overheard and chimed in that the cheese sauce does not contain gluten. I asked if they had a dedicated gluten-free fryer and she mentioned that they do not, and that the tortilla chips can’t be described as gluten-free because they are fried in the same fryer as the flour tortillas. She then went on to explain that the only things that are not gluten-free on their menu are the Ancho-Chile Barbecue sauce, Smoky Chipotle Cream Sauce, flour tortillas, and tortilla chips.

I finished off my order with cheese, sour cream, guacamole, and mango salsa. I decided to take it home to eat because the restaurant was busy and it was a beautiful day, too nice to be sitting inside. If you’re wondering how it tasted, I have one word: Delicious. It had enough kick in it to clear out your sinuses without burning the inside of your throat. The mango salsa (a seasonal item) gave a cool and refreshing twist to a burrito bowl that could have felt like a heavy meal with the rice and bean components. It is very filling. I ate half and had the rest for lunch the following day.

Qdoba also has a rewards program that is free to sign up for. When you register, a free order of Chips & Salsa or Soft Drink is loaded on to your card. The program benefits include emails with deals and specials, a free offer for your birthday, and a free entrée for every 1,000 points earned (this would be about every 10 meals.)

*Burrito Bowl
*Knockout Tacos (on corn shells)
*Loaded Tortilla Soup (in regular bowl, not tortilla bowl)
*3-Cheese Nachos (this is going to be dependent on how sensitive you are – if you’re Celiac or have severe reactions to gluten, then stay away from it. If you have a mild sensitivity or are gluten-free by choice, be aware that they use the same fryer for their chips as they do for the flour tortilla bowl.)
*Taco Salad (in a bowl, not shell)
*Mango Salad (in a bowl, not shell)
*Grilled Quesadilla (on corn shells, not flour)

None of the desserts are gluten-free